This bundle includes the following:

The Northern Glow is a stunning TKL Keyboard built with quality and design in mind. It features the new high quality DG optical clicky switches and RGB leather wrist rest. It also features double injection keycaps, aluminum backplate and over 55+ RGB options that can be accessed on the keyboard or using our software.

A uniquely designed RGB Leather wrist rest that attaches to our Northern Glow TKL keyboard magnetically. The wrist rest is designed to relieve pressure from your wrists during extensive use.

The Northern Glow is the most customizable keyboard when it comes to RGB all available without needing to download our software!

Unlike printing, these keycaps allow RGB to shine through so you can game in style!

Your one stop shop to customize the internal gears of your Northern Glow TKL. The Northern Glow Software allows you to access features such as macros, RGB lighting and more! Our software is still under development but will be available for download at https://www.venatos.com.

Honestly im happy that i got what i want , the mouse and keyboard are build in the best way ! Im so happy 😃

Initially I was sent the wrong bundle (the mouse instead of the red switches). I contacted Venatos and thankfully they resolved it. This keyboard is exactly what I was looking for: a TKL with a wristrest. I'm going to swap out the keycaps though, I want a cleaner look for the board with no function markings on the keys.

M
Maximillian Martins
Great, but the software needs some work

The keyboard itself is amazing, but the software definitely needs to be improved. There is very little customization beyond changing the colors of pre-built animations. I'd love to be able to layer animations, such as having a static layer with a reactive layer on top of the static color in a different color, but the software does not allow this.

Another issue I have is the wrist rest's RGB stays on even after the computer is shut down, meaning you have to physcially disconnect the wrist rest everytime you shut down your pc, and have to change the lighting effect of it each time you turn it back on.

Also it's a shame that black pudding keycaps aren't offered, but they can easily be bought elsewhere.

The LEDs are so bright and colorful, the red switches are SO quiet. It took some time to switch the switches and keycaps but it’s so worth it!! The wrist rest is soft and easy to clean, and the pink pudding caps I got make it even better. Thank you!!!! 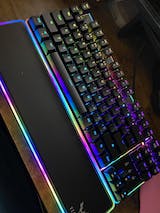 I love the RGB and the feel of the keyboard. Wasn't difficult at all to transition from a full-sized keyboard to this one. Bought the bundle since I wasn't sure if I wanted the orange or red switches but I actually prefer the orange switches it already came with. Overall, 10/10 would recommend.

Added to your cart: